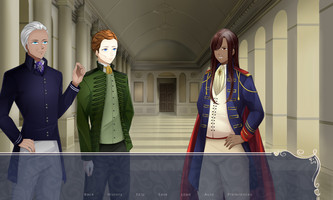 Since the last update, the men's sprites have been finished and another background has been completed for 'Thorns'. Above you can see Charlotte's younger brother, Marc, in the House De Souza sitting room. And we have (from left to right) Count Pieto, Sir Mathys  and  King Auguste at the embassy.

Now all the base sprites are complete, we are only four backgrounds away from having enough assets to start making the demo. So, with that in mind, I'd like to get some opinions on how people would like the demo to be released.

The demo will (at the time of writing this) cover the first 2-3 days (of approximately 21 days) of the route selected.

I'd like to know if people would prefer to wait longer and have the demo contain all routes upon release or would people prefer to have the demo released as soon as the first route is completed, and then updated with subsequent routes as they are finished.

And if people would like the latter option, where the routes are released one by one, which route would people like first? I'll order them by the number of requests I get.

The routes are Bastien, Charlotte, Frederique, Guillaume, Leopold, Sofia or starting the game free and single ^_^.

Anyway, if you have an opinion one way or the other, please let me know in the comments. Otherwise, I'll spare myself the extra coding and uploading time and just post the complete demo once it is all finished. ^_^

Get The Rose of Segunda

The Rose of Segunda

All at once is better than getting it by piecemeal. Then we don't have to check in and download all the time. Also King Auguste, eeek. Is that what we have to look forward to once Guillaume grows older? And is Guillaume forced to have almost the exact same hairstyle as his father because the tyrant is a narcissistic?

I do think all at once is probably the best option. As far as ordering them from favorite to least favorite, it would be: Frederique, Sofia, Charlotte, Guillaume, single, Leopold, then Bastien.

I agree. It's not  like we wouldn't be waiting anyway, so it's better to wait until everyone available all at once.

I'd prefer to get the demo sooner and then updates! And the first route would be Leopold <3

Congrats on the steady progress! I'm so hyped for this!

As for your questions, I'd rather have all of the routes ready for the demo, even if it means waiting  a bit more. Now, if you release it route by route, then, from the one I'd like the most to the one I'd like the least, my listing would be: Frederique - Leo - Bastien - Guillaume - Charlotte - Sofia - single.

Release the routes all at once, please

Wow! I am impressed with everyone's patient attitudes so far ^_^

Well, whatever happens, I hope to get the demo out in December if possible. The decision made here will merely affect if that is earlier in the month or later.

Thanks to everyone who's commented so far.

I also vote all at once!  I don't mind waiting, even though I keep saying I can't wait I mean I can't wait before getting excited, but I can actually physically wait lol.

Whatever is lowest stress for the team though!

On one hand, delaying demo means no potential hiccups where something in a previous demo is changed, then people get fussy. On the other hand *I really really want a demo now mom please*.

IT'S GONNA BE GOOD EITHER WAY

For your sanity, I'd vote to release it all at once. Yes it'll be a longer wait for us, but I know from my own experience I always catch little things when I'm adding routes or I want to tweak a certain chain of events. It's harder to change once it's out in the wild.

Looking forward to it whenever it comes out though! :3