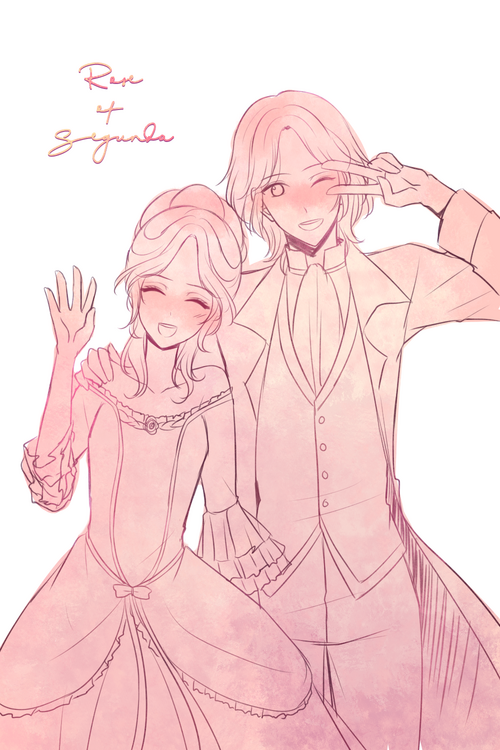 Okay, as promised, 'The Rose of Segunda' has been out for a few months now and I am in a place where I can think about a sequel.

So, if you like the sound of the below and want to either continue your romance from the first game or start a new one, please feel free to take the survey here.  I will leave it open until Friday 3rd August.

If the survey gets enough positive responses I will begin work in October/November with a planned release date of Spring 2019.  If people aren't bothered about a sequel then I will begin work on my next game, the yuri title, De Paris avec L'Amour.

The Thorns of War

Two years after the events of 'The Rose', Segunda is on the brink of civil war.

The disgraced House Stavizzi and the Royal House of Vilquine  have been gathered at the city of Garllucio for peace talks in a last ditch attempt to avoid the looming bloodshed.

Pick up the story as Iolanthe di Parisi and see if you can navigate this new world of political intrigue and double-dealing.

The game will feature:

+ Begin the game with your current lover or remain single to pursue one of the two new love interests: Sir Mathys Aurele or Ambassador Vesela Brovik

+ Nine returning characters from 'The Rose' with updated outfits

Get The Rose of Segunda

The Rose of Segunda

Duly voted. VERY exciting. Just one question: How many goats do I need to sacrifice to Asmodeus to make sure this succeeds?

Not sure? 666  sounds like it should work. But it seems there is no need for any infernal pacts for the time being  - I've got enough interest now and will be putting a post up with more details very shortly. ^_^

I voted yes!! I just discovered Rose of Segunda and I'm loving it! I finished Leopold's route and I was all in and wanted to see how the rebellion played out! I felt a little bummed there was no epilogue but if you have a sequel planned, oh boy I'd buy it in a heartbeat. Honestly, the sequel sounds even better than the original. It seems higher stakes and I love intrigue. I have such respect for your writing abilities after the first one; I really hope you pursue the sequel.

Thank you for your vote. I'm happy you enjoyed the first game and have such high hopes for the second. With any luck, we will get enough positive interest for a sequel. ^_^

Most media, and especially VNs, do this, so don't feel bad; I truly did like the game. It's why all fairy tales end with "they lived happily ever after". But I saw this concept work wonderfully with another indie otome game, Seduce Me, and the sequel is truly a thing to behold after the more banal, but enjoyable, first game. I'd love to see it again here.

Keeping the romances allows two things: actually develop them (since in all VNs, by necessity, what we actually see if the path up to the relationship, and seldom the relationship itself. It almost always ends after the characters hooking up), and focusing more on the plot without thinking "how am I going to make the characters fall in love with this". Now it's easier to fit the romantic moments without having to contrive scenes to make them interact, since they are already living together. It's why Frederique's scenes felt more natural and less something I had to pursue, since you know, they're siblings, so he naturally seeked her out. I didn't have to magically know to go to the music room or the gallery. That leaves more room for the plot itself while not sacrificing on everything else.

Plus, I really, really want to see the mom. She played such a huge role in the first game, but only in spirit; I want to see her confront Frederique and Bastien especially. The scandal!

I'm glad you enjoyed the first game though I would agree that it (and most VN) end at what I've always considered 'the beginning'. I do think that is because what comes after the start of relationship is much more subject to taste - some people have ideals of the MC settling down and having lots of children whereas for others that would be something they really didn't envision for her.

But I hope with this sequel I will be able to explore the continuation of the couples from the first game and their dynamics, while not feeling I am betraying any player expectations or blindsiding anyone.

I can see the concern, but I don't think it will be something you have to worry about; for one, like seduce me 2, you have a common plot already, so you can avoid the baby and marriage thing altogether and just imply it at the end like that game did.

For second, I don't think continuations to the story are that maligned; fandisks to popular games were a huge deal in Japan a couple of  years ago, though only Code Realize and its fandisks made its way west. From what I've seen, the first one was well received. And even a few indie games have done it; always remember me had one in never forget me that dealt with all the gritty parts of marriage and I for one enjoyed it much more than the first game.

Overall, if you have the inspiration to do it, I feel it's a worthwhile experiment. If nothing, you'll be able to gauge how the market reacts and be better prepared if you ever have another game you want to make a sequel to. Or if you ever want to make a game with a different story structure that has the character marry midway or at the start of the game; another concept that I seldom see in VNs.

A sequel? Well that money wasn't doing anything anyway.

*laughs* I had the very same thought myself ^_^

'People want a sequel? Ehh, I'm sure I can find some money in the budgets somewhere.'

It is so good idea about the sequel, I love the first game, and I really want to see the continuation of their stories, and their relationships.

This game is so good, it deserves a sequel and even a movie (Or an anime at least).

P.D .: I did not know that the protagonist was named Iolanthe, I've taken a surprise.

Sorry, I don't know how I missed your comment.

I'm glad to hear you enjoyed the first game - I'm not sure I can promise a movie or anime, but another game is definitely something I can provide ^_^

A sequel will be fun.

Thanks for voting - fingers crossed ^_^

I would be so happy if we could get a sequel with both the old and new romances! I'm so excited and this sequel seems like it'd be even better than the original, which doesn't happen often. The plot thickens! Can't wait to outsmart everyone with Duke Leopold heh.

I'm glad to hear you like the premise of the sequel - with any luck, there'll be enough interest and I can make a start with the artists in August.

I submitted a survey response, but would also like to say here that I am thrilled about the possibility of a sequel!

Ah, thank you. I hope it gets enough responses so we can go ahead with it ^_^

I bought your game on Steam and just finished it, honestly I think what you created was a total Otome gem! Personally I would love a sequel, the first game would have set it up perfectly to dive more into the characters, their relationships, and how they navigate the new problems that will be in store for them. Really excited to see if this happens!

Thanks for the feedback - I'm happy  to hear you enjoyed the game.

Yes, when I sat down to think about the sequel, I wasn't sure about how I would bring everyone together again, but once I got the initial idea everything seemed to flow from there and I now am quite looking forward to having the chance to expand on the relationships between the characters etc.

I would play the heck out of a sequel!  It's rare that I enjoy an otome so much that I play every single route. Here's hoping you get enough interest!

I'm glad to hear you enjoyed the game.

I will admit, I was not really expecting to get many positive responses on the survey, but there have been quite a few so far.  ^_^

Yep!!!!  Oh man, I really, really hope you get enough interest.  I *LOVED* TROS and even made another otome friend buy it recently, though she hasn't played it yet because she has like... every VN on steam and is slowly working through her back log LOL

Fingers crossed for you guys!!!

Ah, thank you. I hope your friend enjoys it when she reaches it. ^_^